Dozens of Cabal Elites from around the world arrived in Antarctica for a tour of recently excavated ruins beneath the ice that included libraries and temples. These ruins are said to have different building styles as if they came from different civilizations but were built during the same time period alongside one another. The Custodians of the old gods were descendants of a priest cast from the ancient Pre-Adamite capital city that was covered in the ice when Antarctica was inundated close to 12,000 years ago. 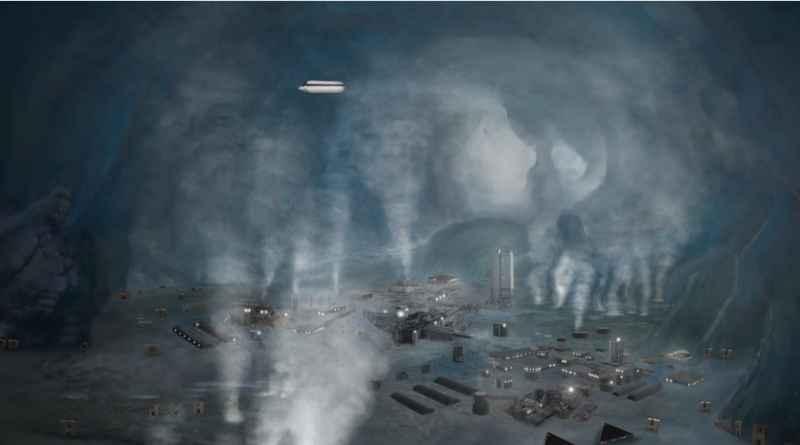 After the tour, led by one of the custodians of the old gods, the Elites came together in one of the old structures and laid out prayer mats in areas where they had privacy from one another. It was a massive building that was created out of massive stones but on the inside, the walls were plastered and covered in art and iconography. There were two representatives from a secret royal bloodline that have genetic ties to the Pre-Adamites, a group they call the old gods. These were not the human elites that conspiracy theorists would be familiar with and were made up of just about every race on the planet.

They broke up into their groups of two after one of the custodians handed each of them long skinny pieces of cloth that appeared to be made of a fine mesh of gold. They then retreated to the area where they had laid their prayer mats, removed their clothes, and sat on the mats holding the cloth strips in front of their faces as if they were going to read something off of them. They then went into a meditative prayer state that then led to chanting and rocking in place. The intensity of this prayer ramped up until each of them collapsed in what looked like a state of ecstasy. Each of them arose from the prayer mats with happiness beaming from their faces.

At this point the sound of a large Gong echoed through the ruins and under the ice dome above it. The Elites then filed out of the building as if they had rehearsed what was about to happen next. They took the golden cloths that they had been praying over and wrapped them around their heads covering their faces and wrapping around their necks and hanging down between their shoulder blades. Wearing nothing else they ventured past a geothermal geyser and a pool of water that cast an eerie steam plume that billowed upward. They then entered an ancient temple that had a very Aztec type of architecture.

The temple had 5 entrances that turned into hallways that led directly into a domed temple room. As the human elites entered the inner temple they saw the custodians of the old gods in balconies playing stringed instruments and drums and cymbals. Down in the center of the temple floor was a group of custodians of the old gods dancing. They too were completely naked with only the golden cloth wrapped around their heads in the same fashion described earlier. Each of them had what looked like a smaller rib cage than a normal anatomical human and they had wide hips, slight potbellies, and prominent breasts. They were obviously androgynous as they had both male and female sex organs that were very visible in the strange ceremonial dance they were doing.

At this point other figures started appearing out of the other 4 entrances to the temple. One group coming in appeared to be humans but very small in stature. They appeared to be around 3 feet tall and had dark olive complected skin with male and female representatives of their own royal bloodline. From another entrance, a large group of humans entered the inner temple that appeared to be 8 or 9 feet tall and very muscular. They too were completely naked with the golden mesh veils wrapped around their heads. Then some of the custodians of the old gods came out of the other two temple entrances. Through one entrance they entered in the same ceremonial fashion as the human elite, the little people, and the giant people. In the remaining entrance, 4 figured emerged dropping yellow and red flower petals on the floor as all groups slowly moved towards the middle. Each of the figures was representative of each of the other groups in attendance. They were paying respect to another race that had perished in the last cataclysm.

The music ended and the dancers cleared the ornately decorated stone floor of the temple that had a huge angry black sun in the middle of the room with lighting bolds coming out. Some of the custodians of the old gods came out wearing cloaks and old scrolls that were recently recovered from one of the ancient libraries that were recently excavated. They had what looked like gold leaf cylinders that they opened and removed scrolls from. They read from the scrolls that were in an ancient language that everyone present seemed to understand. They were all very excited as if they were hearing a prophecy from a long-lost religious tradition. At various points, during the reading, the groups broke out into applause either together or as if their group was hearing something specific to them that they appreciated. They began chanting and singing in this ancient language and then the music began again as the scroll readings concluded. Each of the groups then exited the temple the same way they had entered and the human elites walked back to the building they had left their belongings where they got dressed and made their way back to the surface of the ice via the strange elevator that had delivered them to the dome deep beneath the ice.

This ceremony seemed to be centered around the eclipse but was also an opportunity for elites to come down and have a Disney Land type of experience by touring the city of the old gods and hearing readings from their libraries. There are a lot of stories that the elites were in Antarctica to surrender. I wish this was the case but it appears this was a long-planned ceremony and celebration of the excavation of a temple complex and its library that they have been looking for for a long time.

I have provided this summary of the Antarctic Eclipse information above as well as a summary about recent meetings between the Global Galactic League of Nations groups and the Zulu Elders and the first description of the Zulu planet until I can give the full reports. All of this information was shown to me and the SSP Alliance delegation using the same proprietary breach methods that had been used in my prior reports.